As a result of investments that have enabled the company to have a modern  industrial and highly competitive plant, Hercules Electric Motors Ltda., which specializes in the production of electric motors and special frequency inverters, began operating in 2005. During this period the milestone of three million motors produced was exceeded. Hercules Electric Motors came to the market with some differentiators, the plant, which occupies an area of more than 15,000 m2, houses modern equipment, highly trained personnel and research laboratories, and a Total Quality Control system, which is completely in tune with the market place requirements. Complementing this, the company also implements sustainability initiatives and constantly maintains controls to issues such as health, safety and environmental awareness.

The production process of Hercules Motors is mixed, with make-to-order (MTO) and make-to-stock (MTS) production orders, but mostly MTO. Currently it has 77 primary resources divided into 23 work centres, each with its specific tools and operators.

With the rapid growth of the Hercules Motors and lack of an appropriate tool for Planning, Scheduling and Controlling in the production process, they were having some difficulties:

With the instability of the program and the difficulties in day to day production, the PP&C sector sought a software-based solution to be able to help them with the production schedules. During the same period another Mueller Group company was implementing Preactor for Production Scheduling in partnership with APS3, Gold Solution Provider located in Curitiba / PR. As part of the Group, Hercules Motors also began to use the Preactor solution.

The project was developed using SCRUM methodology, with the involvement of employees of IT, PP&C, Logistics, Manufacturing, Maintenance, Sales, Engineering Processes and Products sectors.

One of the major difficulties in conducting the project was the number of records to be processed and the labour intensive work needed to convert the data.

To implement the solution, it was necessary to make changes and create new entries into the ERP system. Moreover, it was necessary to review all the process times, create new groups of resources, and raise all the secondary tools and their relevant attributes. During the project it was assessed that the setup times should be sequence dependant. The resources were divided into 23 work centres to generate a setup matrix by using the attributes that identify the different product features.

Within the project all primary resources were scheduled by Preactor, taking into account 141 secondary constraints and 170 sequence dependent setup attributes. The production orders are scheduled monthly, reprogramming is done on a daily basis and production control is performed by a Viewer that PP&C uses to monitor production processes and collect data from the factory floor.

The table below displays the goals and objectives to be achieved in the project, but more surprising was that in the first four months in use, virtually all of the indicators achieved the desired results. 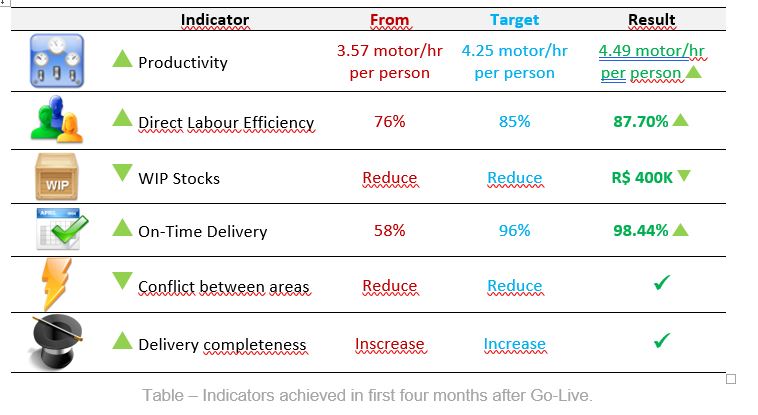 In addition to the indicators previously recorded, other general improvements were achieved: